Posted by vegan hip hop movement at 12:02 AM No comments:

"I want every white person in this room, who would be happy to be treated as this society in general treats our citizens, our black citizens. If you as a white person would be happy to receive the same treatment that our black citizens do in this society - please stand! - You didn't understand the directions. If you white folks want to be treated the way blacks are in this society - stand! - Nobody is standing here. That says very plainly that you know what's happening. You know you don't want it for you. I want to know why you are so willing to accept it or to allow it to happen for others." - Jane Elliot
Posted by vegan hip hop movement at 2:03 PM No comments:

"An Open Letter to People of Color:
Please do not trust white people.
Every single one of us is racist, it's something we were born and raised into, we were and are consistently indoctrinated into white supremacy.
Indifference and apathy towards systemic racism and it's horrific results is not just more comfortable, it is incentivized; we are actively rewarded by white supremacy in it's many forms for ignoring people of color and their cries for injustice.
Our bones are riddled with it, it's everywhere.
We were taught the the history of our nation through textbooks written by white men with a vested interest in how the story was and is being told.
So we think that MLK Jr is the patron saint of polite black folks (to be invoked against the angry ones), peanut butter is the extent of black excellence, and according to the newest textbooks, slaves were just unpaid interns.
We were brought up being given medicine designed for us by white men, men who historically tortured black women and murdered black babies to found gynecology, men who performed surgeries on black people without any anesthesia and no precautions because it was believe that black people can not feel pain.
And you wonder why we do not sympathize when black children are gunned down by police?
Nothing stopped, the framework of systemic racism just keeps getting dressed differently, yesterday's fire hoses and attack dogs are today's cultural appropriation, tone policing and respectability politics.
We are the ones who committed genocide, stole this land, and now, generations later, think it's cool to dress up like the folks we massacred.
We're the ones making fun of people who can't speak "perfect" English, we're the ones who've come up with every single racial slur used in this country.
We're so much more concerned about you questioning us, telling us no or calling us out than we are what you're actually experiencing at our hands.
We will spent countless hours just poking at you, trolling you just to prove you're this less intellectual, overly emotional animal, to get you to fail a standard we set for you without ever clueing you in on it.
We are the ones who built this country on the blood, the bodies and the backs of people of color and then built Mt Rushmore, statues, monuments to white men.
We rigged the economy, the government and the schools, created the ghettos, set you up for failure and then we blame you for your not pulling yourself up by your bootstraps.
We are still making you defend yourselves, over and over ad infinitum. We make you defend your personhood, your autonomy, your agency, your decency, your humanity because when you keep minorities on the defensive, when you keep them explaining who they are and justifying their right to life - nothing real ever gets done.
Even though I'm queer, even though I'm trans, I still get to sit in the "Whites Only" section and I have heard what gets said and I'm begging you, please don't trust us."


my two cents, which will likely be modified because i'm exhausted but i just wanted to start to get the word out while it's still fresh.  i think for now i'm just going to share the screen capture from facebook so you can see for yourself and i'll fill in the blanks shortly... 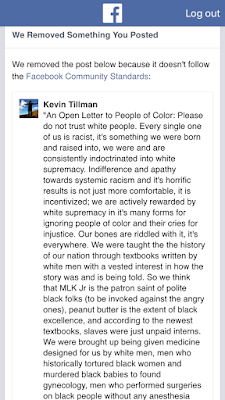 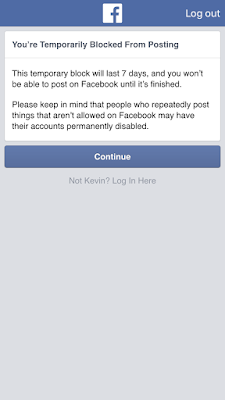 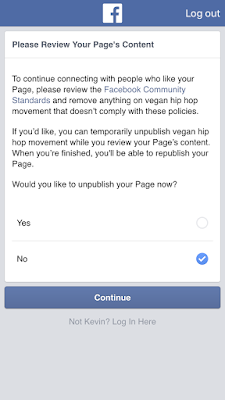 *what the hell kind of sense does that make?!  facebook offered me the option to "temporarily" unpublish the vegan hip hop movement so as to remove the "troubled" content that they already fucking removed?  nice try, facebook but fuck you! 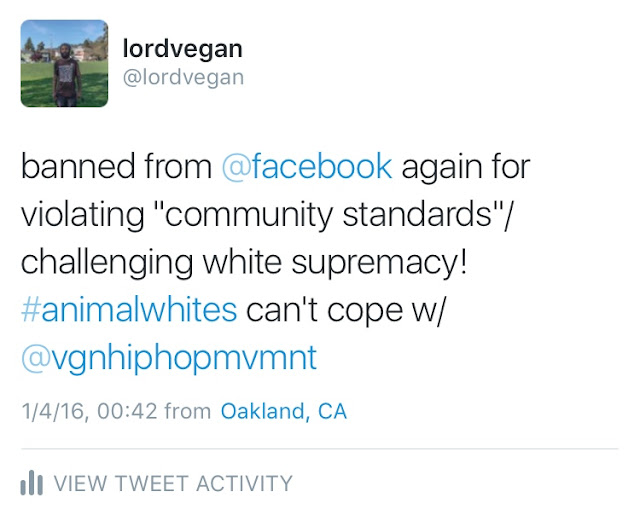 Posted by vegan hip hop movement at 2:39 AM No comments:

Posted by vegan hip hop movement at 7:44 PM No comments:

well worth your time

we are here to build!!

"exploit the loopholes, live off the excess"